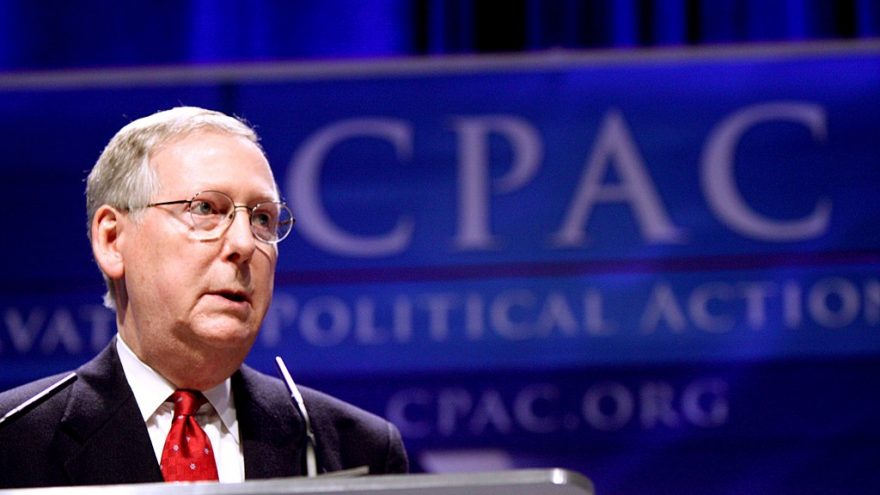 Mitch McConnell has been presented with the spectacle of giant American corporations taking sides on a political issue, and his eyes were seared by the sight. The Senate Republican leader could not have imagined Delta Air Lines and Coca-Cola, much less Major League Baseball, coming out against a piece of legislation. Processing the trauma may require years of therapy.

“I’m talking about taking a position on a highly incendiary issue like this and punishing a community or a state, because you don’t like a particular law that passed — I just think it’s stupid,” he said Tuesday. “So my warning, if you will, to corporate America is to stay out of politics.”

This is not quite what you would expect from a politician who last year got more than $250,000 in campaign contributions from chief executives of major companies. Nor is it quite in line with his longstanding view that corporations enjoy the same First Amendment rights as individuals. But McConnell hastened to add that he was not referring to business people making political donations, a practice he assured them is “fine.”

The apparent problem for him is not that corporations are getting involved in politics; it’s that they are getting involved in a way that conflicts with Republican needs. One of those needs is making it harder for Democrats to win elections in the previously red state of Georgia. McConnell objects to the corporate criticism of a new voting law that is designed to tilt the scales in favor of his party.

Major League Baseball decided to move this year’s All-Star Game from Atlanta to Denver to register its disapproval. Delta and Coca-Cola issued statements denouncing the election measure. But these were hardly the first time that professional sports or other businesses have intruded into the political realm.
Team owners use their leverage to extract public funds for stadiums and other arenas, notes Chris Lamb, author of the book “Conspiracy of Silence:

Sportswriters and the Long Campaign to Desegregate Baseball.” They host politicians in their luxury suites. They make campaign contributions. Says Lamb, “I wish owners would stick to sports.”

They also lend support to various causes that are inseparable from politics. All those military flyovers at ballgames are an implicit endorsement of our militaristic foreign policy. After 9/11, baseball teams started playing “God Bless America” during the seventh-inning stretch, a gesture of support for President George W. Bush’s war on terrorism.

McConnell doesn’t long for the era when big companies had no political agendas, because there was no such era. He longs for the time when they could pursue their political agendas without enduring nonstop scrutiny from their customers or employees.

Today, Americans often take account of the political activities of companies when making their purchasing decisions. Some companies see speaking up for social justice and racial equity as a matter of conscience -- and a way of appealing to consumers who agree. They also know that silence merely invites criticism from either side.

Michael Jordan famously justified his avoidance of political controversy by saying, "Republicans buy sneakers, too." Nike took the risk of alienating customers with an ad campaign featuring San Francisco 49ers quarterback Colin Kaepernick, who gained notoriety by kneeling during the national anthem. The Nike shoe decorated with his image sold out the first day.

Many athletes, despite being told things like "shut up and dribble," insist on using their public visibility to advance causes dear to them, regardless of who objects. Players for the WNBA Atlanta Dream wore T-shirts endorsing Democratic Senate candidate Raphael Warnock in his race against Kelly Loeffler, who happened to be one of the team's owners.

Consumer boycotts over political activity have become an unavoidable feature of the marketplace. Critics who denounce these efforts as ugly manifestations of "cancel culture" use the same tactic when it suits them. Former President Donald Trump, with his usual flair for falsehood, urged: "Boycott baseball and all of the woke companies that are interfering with Free and Fair Elections. Are you listening Coke, Delta, and all!"

Good luck with that. Fear of the MAGA crowd didn't stop The Walt Disney Company, a shining symbol of wholesome American fun, from announcing last year that it would give $5 million to organizations fighting for social justice.
Republicans often accuse the left of hating America. But it's not liberals who find themselves at odds with baseball, Coke and Mickey Mouse.

4 thoughts on “Republicans Versus ‘Woke Corporations’: A Losing Battle”