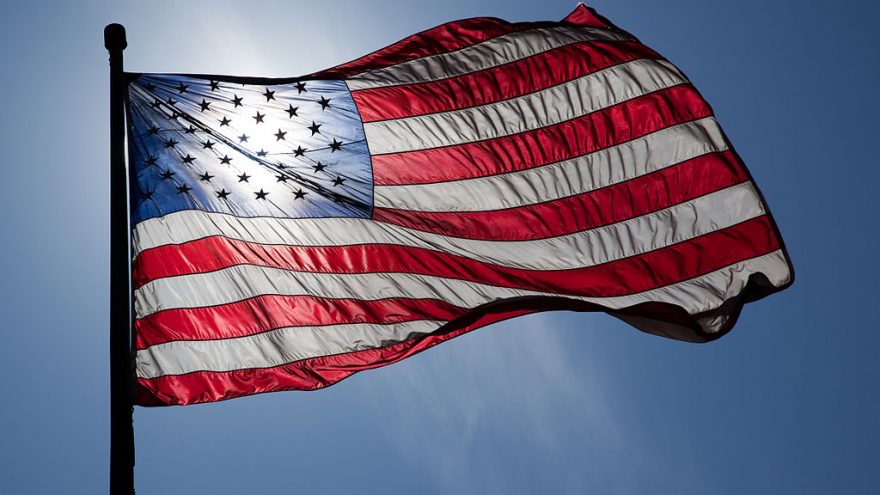 The backdrop of the song was the British attack on Baltimore during the War of 1812. Key had been sent to negotiate a prisoner release and boarded the British flagship HMS Tonnant. During the negotiations with British Vice Adm. Alexander Cochrane, Key overheard the war plans. Consequently, the British held Key captive until after the assault on Fort McHenry, forcing him to stay on the HMS Surprise until the attack had been completed on September 14.

Through the night, Key watched the British bombard Fort McHenry and, as the sun rose, he saw the American flag still flying over the fort. In fact, the Americans had replaced a smaller flag with a much larger one. As the smoke cleared overnight from the fort, there flying at sunrise was Old Glory — then 15 stars and 15 stripes.

Key was moved to pen his poem, which he first named “Defence of Fort M’Henry.” It was later called “The Star-Spangled Banner” and became immensely popular in the new republic. It began to be played regularly at Independence Day celebrations. In 1899, the U.S. Navy began playing it, and President Woodrow Wilson, in 1916, ordered it regularly played by the military. In 1918, during the first World Series, the anthem became a fixture of baseball. In 1930, the Veterans of Foreign Wars started a petition to recognize it as our national anthem. It became just that on March 4, 1931. In 1956, Congress embraced the fourth verse of Key’s poem and adopted “In God We Trust” as our national motto.

Only recently have revisionists began to claim “The Star-Spangled Banner” is racist. The third verse includes the lines, “No refuge could save the hireling and slave / From the terror of flight, or the gloom of the grave / And the star-spangled banner in triumph doth wave, / O’er the land of the free and the home of the brave.”

Gwen Berry, an American athlete and activist, turned her back last week when the anthem was played. She said in an interview that the national anthem has “a paragraph” that speaks to slavery. She means American chattel slavery. Her statement is born of revisionist ignorance.

Key's poem is about the attack on Baltimore and the battle at Fort McHenry. He was not alluding to or mentioning African slaves in the United States. At the time, the American Navy and military prided itself on being a volunteer service. The founders of the country were fearful of a standing army and embraced the concept of a volunteer service. Key stood on the deck of the HMS Surprise, a captive of the British, and watched the volunteer Americans fight off the fiercest empire on the planet.

The British Navy, at the enlisted level, consisted of hired mercenaries and sailors impressed against their will and forced to fight in service of the British. Those impressed sailors are the slaves Key referenced. Modern progressive historians have twisted the truth. The fact and actual truth -- not my truth or your truth, but the actual truth -- is that Francis Scott Key's entire third verse is about the British Navy.

It is common now to hear claims that Key referenced slaves and that the reference is about chattel slavery. It is foolish anti-American revisionism and ignorance to make that claim. It is devoid of both the historic context and actual truth. Key's poem stands the test of time and concludes beautifully with a fourth verse.

"O thus be it ever, when freemen shall stand / Between their loved homes and the war's desolation. / Blest with vict'ry and peace, may the Heav'n rescued land / Praise the Power that hath made and preserved us a nation! / Then conquer we must, when our cause it is just, / And this be our motto: 'In God is our trust.' / And the star-spangled banner in triumph shall wave / O'er the land of the free and the home of the brave!"

Have a wonderful Independence Day.