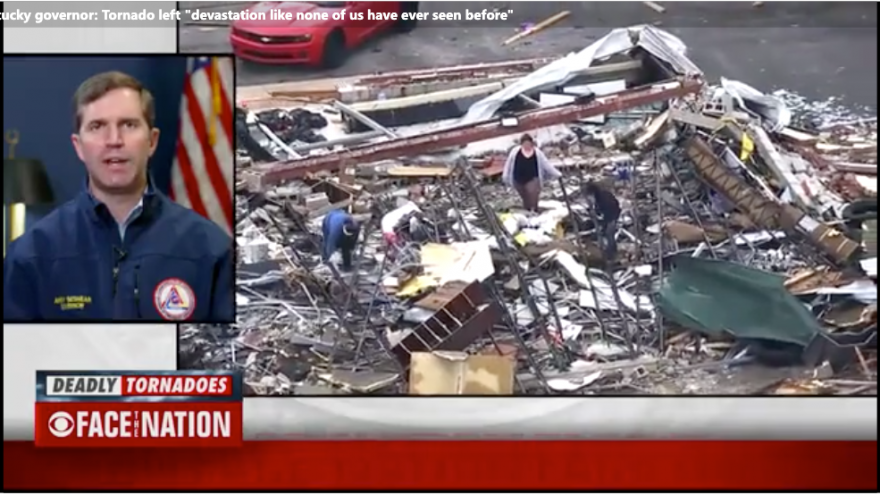 While thousands of Kentucky citizens continue to reel over the massive devastation and loss of life caused by tornadoes this past weekend, some national figures took the opportunity to politicize the tragedy, casting blame on Republicans and policies for the natural disaster.

In Sunday’s interview on CBS’s Face the Nation, Kentucky Governor Andy Beshear described “devastation like none of us have ever seen before.” Beshear stated more than 80 people are known to be dead with the death toll likely to exceed 100 as search and recovery efforts remain underway. The majority of casualties resulted from a candle factory that collapsed with workers still inside as tornados ravaged the city of Mayfield, KY.

In response to CBS’s Margaret Brennan’s request to account for the seasonably uncharacteristic storms, Beshear said, “Well, as of today, just a day after, we’re worried about finding other Kentuckians, we’re worried about providing shelter for them. We are grieving with so many families and we’ll worry about or think about the cause once we have everybody stabilized.”

As Beshear grieves the loss of life and rallies Kentucky communities in the aftermath of the storms, President Biden was quick to identify climate change as the culprit for last weekend’s deadly tornadoes. Biden, who has spent the last several months engaged in efforts to push a massive climate change bill through Congress, stated, “This is one of those times we’re not Democrats or Republicans.” The President took the opportunity also to claim that “we all know everything is more intense when the climate is warming and obviously it has some impact here.” He conveyed his intent also to commission the Environmental Protection Agency to further consider an explanation.

Biden isn’t the only Democrat to politicize the tragic loss of life, however. Representative Eric Swalwell of California tweeted his criticism of KY Senator Rand Paul’s voting record. In the same statement that he offered condolences to Kentucky, he stated also, “But do not for one second forget that Rand Paul has voted against helping most Americans most times they’re in need.”

Tragedy is apparently never not political.