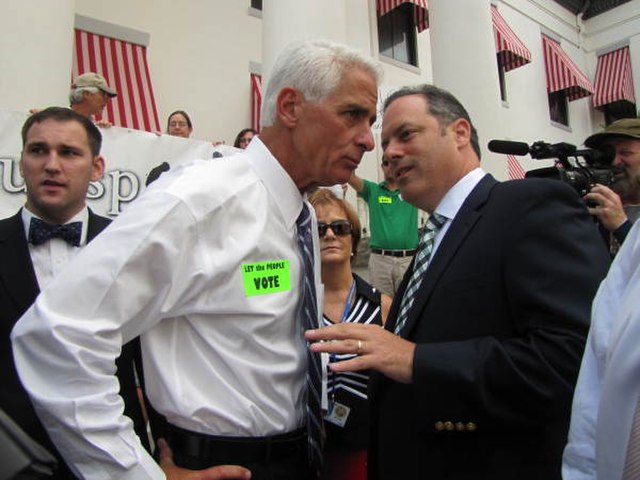 It’s as if we are living out the real-world scenario of the Left Behind books by Jerry B. Jenkins published in the 1990’s. Not only do we have an MSNBC host saying that “Jesus Doesn’t Care About Abortions” but we also have the Florida Gubernatorial candidate portraying himself has Jesus Christ and labeling Governor Ron DeSantis as “DeSatan.”

In a Twitter video, Charlie Crist tells that crowd that popular Governor Ron DeSantis is known as “DeSatan” before pointing at a Crist campaign sign, while saying “Christ.” The self-absorbed Charlie Crist made himself out as Jesus Christ and DeSantis as Satan.

Florida Democrat gubernatorial candidate Charlie Crist compared himself to Jesus in a bizarre stump speech that was uncovered this week. During the speech, he said he was fighting against “DeSatan,” a reference to the state’s popular Republican Governor Ron DeSantis.

Charlie Crist said, “This is an election about decency, about being decent to one another, about being kind to everyone,” Crist continued. “It’s called a Florida for all. You know, we got a divider on the other side [DeSantis] and a uniter over here [points to himself].”

“You know, some people call him ‘DeSatan,’ have you heard that?” Crist continued. “DeSatan vs. that [points to a campaign sign of his last name.”

“Christ,” a few in the audience responded.

Read more at the Daily Wire.

In the popular Jerry B. Jenkins “Left Behind” books, Nicolae Carpatha rises to political power while, hiding his AntiChrist persona. Today, we have Charlie Crist trying to portray himself as Christ. No, Mr. Crist. We will not tolerate this. The good guys always win. And that is Governor Ron DeSantis.