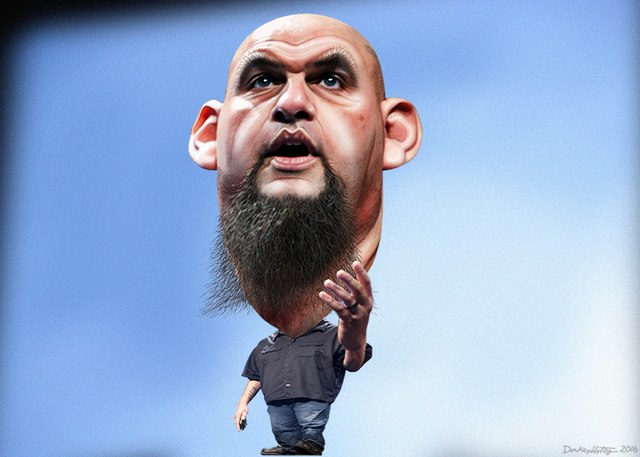 (D) Pennsylvania Lt. Gov. John Fetterman suffered a stroke in May, and his return to a full-effort campaign has been slow since the stoke, which was considered to be life-threatening. Fetterman is running against Trump-backed candidate and T.V. star Dr. Oz.

Fetterman has been out of the public eye for a large portion of his campaign trail. Controversy ensured due to Fetterman not being seen in public, however, he was able to make time to fundraise in the Hamptons. Since Fetterman’s stroke, speaking for prolonged periods of time has become more difficult. While Dr. Oz’s campaign takes no joy in Fetterman’s stroke – Fetterman’s team has no right to lie to the public about his health.

“I’m doing fantastic, and it’s not about kicking balls in the authority or anything,” Fetterman recently told MSNBC host Chris Hayes. (Fetterman mixed up the phrase “kicking authority in the balls,” which is how Republican candidate Dr. Mehmet Oz had described Fetterman.)

“And make sure you take advantage of this amazing opportunity to, the only thing you have… stand… to lose is your record,” Fetterman said in a prerecorded video to supporters last month.

Of course, these quotes from someone only 53 years old are not typical. When Joe Biden ran in 2020. It was obvious that his mental abilities were not what they used to be, and he was consistently saying things that make little to no sense. However, Fetterman at only 53 is someone you’d expect to be able to string together sentences correctly. While Fetterman’s team is not being transparent about the lingering effects of his stroke, Dr. Oz and his camp need to inform the public themselves.

Fetterman about his stroke recovery at a Pittsburgh rally earlier this month while taking aim at Oz.

“As you know, I had a stroke,” Fetterman told the crowd. “Oh and I’m so grateful to be here today now after surviving that better and better, you know?”

“You know, the only lingering issue that I have after that stroke is sometimes auditory processing, sometimes. And, every now and then, I might miss a word or, sometimes, you know, I might mush two words together,” Fetterman said before bringing up a video of Oz that his campaign has mocked all summer.

Fetterman has taken criticism for not being open about his health since his May stroke, which occurred days before he handily won the Democratic nomination for Senate. Oz and others have raised questions about whether the 52-year-old former mayor of Braddock, Pennsylvania, is up to the task of serving in the Senate.

“If he’s willing to tell a journalist that he doesn’t need a heart transplant on the record, what is the big deal about making his medical records public to back that up?” Yanick said. “Fetterman already hid the fact that he had atrial fibrillation when he ran for lieutenant governor and throughout the Democratic primary for Senate, so how can we take him at his word now?”

“The Pittsburgh Post-Gazette called on both candidates to release their medical records weeks ago. Oz released his. Why hasn’t Fetterman?” she continued. “It’s bizarre and strange he hasn’t done it yet. What is John Fetterman hiding?”

One thought on “Is Fetterman Really On Top, Like The Polls Claim?”